Melissa was a 45-year-old research nurse in Africa with a long history of major depression. When her depression worsened, she went for treatment and was prescribed paroxetine (Paxil). Less than a month later, she committed suicide.

An autopsy showed that, despite having taken the medication as prescribed, there were no detectable traces of Paxil in her bloodstream. The medication wasn’t helping her, because somehow it had vanished from her body. 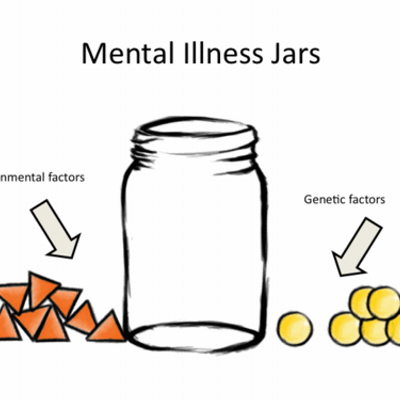 How was that possible?

As it happened, Melissa had gotten her genome sequenced as part of an earlier research project, so scientists  in her lab learned after her death that she had duplication of the CYP2D6 gene, which codes for enzymes that breakdown and inactivate drugs like Paxil.

This discovery lead the doctors to conclude that Melissa’s genetic make-up doomed Paxil to fail from the start because her system was doubly efficient at breaking down the drug, eliminating it from her system and making it unavailable to her brain.

Someday doctors will routinely have such genetic information before they prescribe psychoactive medication and greatly improve the hit and miss results that contributed to Melissa’s death.

And that someday is today.

Like Melissa, Andrew had suffered from severe anxiety and depression for years. His problem wasn’t that antidepressants didn’t work, but that the drugs caused severe side effects. In desperation, he turned to the Mayo Clinic where “pharmacogenomic” testing had recently been implemented. Mayo doctors discovered that Andrew had the opposite problem from Melissa: he lacked the genes to code for enzymes to breakdown the drug properly, so that the antidepressant remained in his system in abnormally high doses, producing severe side effects.

The rapidly declining costs of genetic testing that made Andrew’s recovery  possible are poised to foster a major revolution in mental health care.

A revolution that is sorely needed.

For instance, although roughly 10% of Americans will take antidepressants sometime in their lifetimes, the National Institutes of Mental Health estimates that these medications are only slightly more effective than placebos. Even the most optimistic assessments of antidepressant efficacy have found that only 1/3 of patients respond to the first medication tried, and that trial and error with alternative and multiple medications is required before an additional 1/3 of patients find some relief. Sadly, around 30% of those who suffer from depression do not respond to medication at all.

A recent clinical trial further revealed (based on genetic tests discussed below) that up to 70% of patients are prescribed medication that has no chance of working.

And a quarter of patients who take antidepressants, report significant side effects of the kind that Andrew experienced.

Patchy effectiveness and troubling side effects of psychoactive drugs are also the rule for OCD, schizophrenia, ADHD, bipolar disorder, PTSD and other mental disorders.

But geneticists and neuroscientists are zeroing in on genetic markers that can predict which patients will respond to which drugs without major side effects, minimizing the “shot-in-the-dark” treatment strategies that prevail today. According to one of the testing companies that offers genetic screening for psychotropic drugs, 210,000 patients have already been tested for genetic markers that indicate whether a medication will work or have significant side effects.

Early clinical trials indicate that these tests can double the effectiveness of drug treatments for depression while reducing side effects.

The tests are far from perfect, and currently only address a few neurotransmitter systems and drug metabolic pathways, but progress is rapid.

Advances have been so promising that I predict genetic screening will be a routine first step in prescribing drugs for mental conditions within ten years.

If you or someone you love has struck out with medication for mental illness and can’t wait 10 years, take heart. Thirteen thousand health care providers have signed up to prescribe these tests and a number of medical schools and hospitals are launching psychopharmacogenomics programs and conducting clinical trials as I write.

Instead of shooting in the dark, your doctor may take precise aim at your illness in the full light of psychopharmacogenomics.

My psychiatrist is doing this. He is going to test me as soon as I find my Medicare card. They were supposed to send me one but haven’t so I will have to call them and wait… If and when I get my Medicare card and get the test done and find out the results, I will let you know what I learn. I think it will be fascinating. So happy to have a new Psychiatrist with new learning and training and knowledge. Love, Sue